Why might the word ‘ratio’ cause confusion for students learning trigonometry?

After watching how a Shanghai teacher approaches it, Gwen Tresidder reassesses her own understanding Gwen Tresidder watched Vivian Yuanyuan, a maths teacher from Shanghai, teach a lesson on ratio to a Year 8 class in Solihull. It made Gwen reflect on how, and maybe why, the word ‘ratio’ often seems to puzzle students when they first encounter trigonometry.

Ever been faced with a look of utter confusion when you mention trig ‘ratios’ to a Year 10 student, only to realise that it’s the word ‘ratio’ that is causing the confusion? Say the word ‘ratio’ and for most students the image that pops into their head is of two numbers separated by a colon. 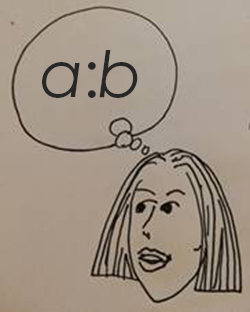 As a teacher, once I recognised this barrier, my usual way of dealing with it was to explain to the class that (by the way) a ratio can also be expressed as a single number, obtained by dividing the first number by the second, and then showing how this applied to the lengths of triangle sides.

Did I ever wonder about the introduction of the concept of ratio earlier on in a student’s school career? Not really. I’m not sure it ever occurred to me to teach about ratio as a single number when covering the topic in Year 8. But that’s exactly what I saw a teacher, Vivian Yuanyuan from Shanghai, do with a Year 8 class in Solihull.

Right from the beginning, she showed a ratio in the a:b format and the equivalent division to accompany it: There was a discussion with the students about what the 3 in this calculation represents (the number of attempts Dylan needs to score one basket) and the equivalent calculation for Emma’s score.

Shortly after, Vivian explained that the ratio a:b can also be expressed as

, something else I have been guilty of avoiding or glossing over, because of the confusion about what the resulting fraction represents:

In this case there are

the number of oranges than there are apples, but this requires the understanding that the ‘whole’ is the ‘number of apples’. Instinctively, looking at this picture, the ‘whole’ is ‘all the fruit’, of which the oranges are

How much better that these difficult areas are identified and defined for students rather than glossed over. If I’m honest, I suspect that my understanding of the difficulty was not clear enough to express it as I have done now, until I had seen the lesson in Solihull.

Strikingly, Vivian named every term. For the ratio a:b, she called a the preceding item and bthe latter item (English language maths dictionaries use the words antecedent and consequent) and the quotient of a ÷ b she called the ratio value. Perhaps just having the terminology would have helped me to see it explicitly and teach it explicitly. If I could describe the numbers used in trigonometry as ‘ratio values’ and expect students to be familiar with the concept and term from Year 8 (or primary school), how much easier would it be for helping students to get their heads round trigonometric concepts?

Gwen Tresidder, NCETM Communications Manager and a former secondary maths teacher, was observing a lesson at Tudor Grange Academy in Solihull in January 2019. The school was one of eight secondary schools (and 35 primaries) playing host to teachers from Shanghai as part of the 2018/19 England-China Teacher Exchange, within the Maths Hubs Programme.