After two decades of teaching ‘telling the time’, Kristen Weiss discovers a way to help children better understand the complexities 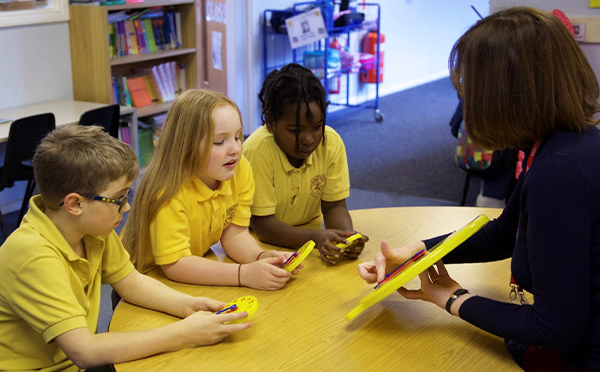 About the author: Kristen Weiss is a Senior Lecturer in Primary ITE at Canterbury Christ Church University. She wrote this piece about her experience of teaching Y3 at Blean Primary School School in Canterbury where she had previously worked as an Assistant Head and Mastery Specialist, working with Kent and Medway Maths Hub.

What would you least like to be teaching when Ofsted knocks?

Many teachers, without a pause, will say: telling the time.

Why is it so difficult?

Teachers respond that some children just get it. Others, who seem to do well in other areas of maths, fall apart when it comes to trying to tell the time:

There are too many steps! It’s base 60! Children don’t have watches anymore!

My experience of teaching telling the time

During my teaching career spanning two decades I have taught time in both key stages. I had come to accept that teaching children to tell the time would be a struggle. Children within one class would be at many different places in their understanding. I’d better differentiate in lots of ways to cater for the different stages children had reached.

Don’t get me wrong – I continued to tinker and try to improve my teaching of time.

Some of it helped, but never to the point where I thought it was going to be straightforward when I saw it looming on the long-term plan.

Then I embarked on my training as a Mastery Specialist with the NCETM and my local Maths Hub. Teaching for mastery aims to keep the whole class together, teaching in small steps and ensuring mastery for all.

At first, I was getting to grips with variation theory and choosing appropriate representations to support children’s mathematical thinking. I hadn’t thought how this might relate to the teaching of time.

Shortly after, I was off to Shanghai on the DfE’s teacher exchange programme. I met many Chinese teachers and pupils and watched a fortnight of ‘ordinary’ maths lessons. (They were anything but ordinary to us.) Amongst a hundred other questions, I asked the Shanghai teachers whether teaching time was a problem for them too. They looked politely surprised, as if this was yet another quirk of these English teachers, like having milk in tea. It didn’t seem to be a problem for them.

How telling the time is taught in Shanghai

I quizzed them about how they structured their teaching and discovered a progression that I had never heard of in all my time as a Maths Lead. In China , they explained, time is said on any kind of clock (digital or analogue) as we would say digital times. So, ‘twenty past 8’ is just 8:20. Aha, I thought – that’s much simpler. No wonder it’s not such a problem!

However, they then went on to say, “Of course, we teach them the English way to say the times too”. My curiosity grew. They didn’t say it with groans and downcast faces.

In fact, the maths teachers don’t teach it at all – the English language teachers cover it in English lessons. But they don’t find it tricky either, as the children already have a firm understanding of time. The teachers merely show them a different way of saying the times that they know. So instead of saying 9:15, which they understand, they learn to say ‘a quarter past 9’. Perhaps the fact that it is said in a different language actually helps? I’m not sure, but I was certain that I needed to think about it some more and consider how it could help me.

Trying it out in England

I was teaching in Year 3 – a perfect place to try out a new approach. A pre-test confirmed that there was, as usual, a wide cross-section of understanding about telling the time. I was determined to use my mastery training and new-found insights from Shanghai.

The other Year 3 teacher and I decided to teach time once a week. We would use the gap in between to do interventions outside maths lessons, with children who hadn’t quite grasped the small step we were tackling. When Friday rolled around, the whole class would be able to move on together.

We didn’t follow the typical progression of ‘o’clock’, ‘quarter past’, ‘half past’ and ‘quarter to’ – these would come later. We introduced digital time first – just as the teachers do in Shanghai. When I say this, I mean we looked at an analogue clock (a clockface) and learned to write time the Chinese way (digital). The children grasped this really easily, as they do in Shanghai.

“... but when we say times out loud, we sometimes say them another way”, we told the children. They had heard ‘past’ and ‘to’ times in their everyday life and were keen to learn how they worked.

I broke the learning down into small steps.

The children responded well to this small-steps approach. A few children (not always those with special needs) sometimes needed additional practice between sessions. The looks on their faces when on Friday they could do the same as their peers was priceless.

If you see ‘telling the time’ looming on the plan, I’d heartily suggest you try the Shanghai way. Who knows – you may even end up asking Ofsted to watch?!