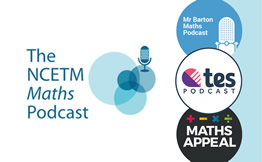 Podcast listening is booming in the UK. A survey last year by the communications regulator, Ofcom, found that the number of adults listening to a podcast at least once a week had nearly doubled, to almost six million, since 2013.

And among those six million are a sizeable numbers of teachers in the UK listening to one of the handful of podcasts devoted to maths and maths teaching. They are all produced by either individuals or organisations working in, or closely with, schools in England.

The beauty of the podcast – each episode is, essentially, a radio programme – is that you can listen to it whenever and wherever you want. You can also stop and start it, to accommodate things going on in the rest of your life. You can go back and listen to something again, and you can keep it in your own library for future reference.

So here are the four maths education podcasts on the landscape at time of writing (June 2019)*. If you can find a spare moment or two to tune in, we hope you’ll find it time well spent. 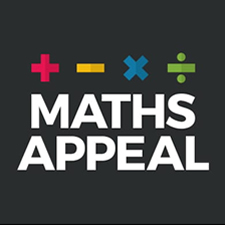 Behind the Maths Appeal podcast, which launched in December 2018, are maths teachers and ‘maths fans’ Bobby Seagull and Susan Okereke. They bring their classroom experience to each episode, but they aim conversations more widely: at students, teachers and ‘anyone who fancies learning something new or brushing up on their number knowledge’.

They usually have a guest with them. Examples in 2019 include Zoe Griffiths (ex-teacher and now ‘maths communicator’); Ken Cheng (University of Cambridge maths dropout, poker player and comedian); and co-founder of Stemettes, Anne-Marie Imafidon. 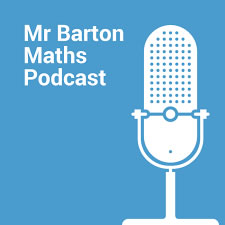 The first maths education podcast to appear on the landscape, and the one with by far the biggest library, is from the Mr Barton Maths stable. It’s run by maths teacher Craig Barton, the author of the successful book about teaching the subject, How I Wish I’d Taught Maths. The book, published in late 2017, draws on many of his podcast conversations. They are certainly not quick listens. Some episodes last up to two hours, as Craig forensically interrogates his guests, always linking research findings to the real classroom world.

Craig’s guests usually have a strong maths string to their bow, but he also talks to people from other subject areas. For podcast newbies, Craig picks three ‘starter’ episodes from his vast library which, he says, have had a profound influence on how he thinks and teaches. The guests in question are: Peps Mccrea (former maths teacher, now in the world of teacher training); Becky Allen (academic and co-founder of Teacher Tapp, an app which analyses responses to daily questions sent to teachers); and the author and researcher Dylan Wiliam, who Craig describes as his hero.

The Mathematips podcast was launched in January 2019 and is hosted by TES. It is presented by Lucy Rycroft-Smith, a former secondary school head of maths and now a researcher with Cambridge Mathematics. Among the first to sit behind a microphone with Lucy are: Margaret Brown, former professor at King's College, London, who must have one of the longest and most impressive maths education CVs in the country; Helen Drury, the key force behind the Mathematics Mastery organisation; and Ems Lord, Director of Cambridge University’s NRICH project.

Last but not least, and with due humility, we mention our own podcast, which sprang to life in the 2017 autumn term, and which brings a new episode every half term, or thereabouts. Teachers (primary and secondary) are the most frequent guests, with conversations oscillating between the teacher-pupil relationship in the classroom, and the teacher-teacher relationship in professional development activities.

At time of writing, our most recent episode focuses on the path a primary school in Leeds has taken on the Mastery Readiness Programme, led by their local Maths Hub. Behind the microphone are the headteacher and maths lead. It’s an impressive story of transformation. GCSE maths teaching was the main target when representatives from the three main exam boards came into the studio in the 2018 autumn term. This is one likely to be repeated every year after results come in and are analysed. And children’s early mathematical development featured in a discussion on Early Years maths in late 2018.

If you’re a compete newcomer to podcasts, you might find this article helpful to get you started with the jargon and technology.

(*) Please let us know if we’ve missed one, or if you launch a podcast aimed at maths teachers in the UK.