Improving maths in multi-academy trusts by engaging with Maths Hubs 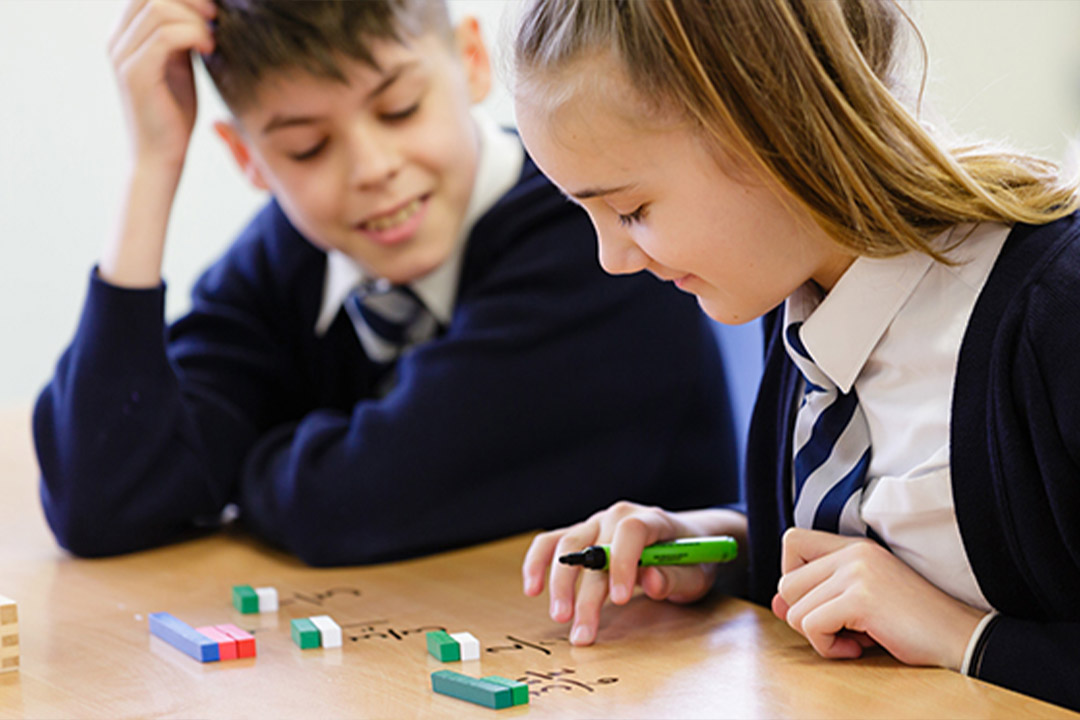 Across England around 5,000 primary schools have taken part in the Maths Hubs Teaching for Mastery Programme since it was launched in autumn 2016. In the early days, most schools took part as a result of individual decisions by heads, regardless of whether the school belonged to a larger school grouping.

Now, though, in spring 2019, there are increasing signs of engagement being encouraged by senior leaders who manage federations and trusts. They see the benefits of enhancing collaboration that already exists within a family of schools, with the expert input and wider experience-sharing that comes with Maths Hubs work.

Size of trust: 31 schools, including 24 primaries.

Location: Spread across the South East.

History: GLF Schools – their initials standing for Grow, Learn and Flourish – formed in 2012 when a secondary school and nearby primary in Surrey needed to federate. They’ve grown gradually since then, adding schools in Oxfordshire, Croydon, Surrey and Sussex.

Since autumn 2015, six GLF teachers (five primary and one secondary) have trained as Mastery Specialists with different Maths Hubs. 13 primaries and one secondary school have taken part in Maths Hubs Teaching for Mastery Work Groups, with more applying to participate in 2019/20.

In one cluster of trust schools in Caterham, Surrey, two schools are part of a Work Group, led by a Mastery Specialist from a school in the cluster. In another pair of schools in the trust, William Morris Primary and Longford Park Primary, in Banbury, both the executive head and deputy head are trained Mastery Specialists. Across the whole trust the development has been led by Kate Mole, the MAT’s Primary Maths Lead, who is also the Teaching for Mastery Lead for London South West Maths Hub.

In February 2019, the trust’s founding primary school, Danetree Primary School in Surrey, whose Maths Lead is a Mastery Specialist, was rated Outstanding by Ofsted after a two-day inspection. The inspection included this observation:

The level of (subject leader) support is particularly strong in mathematics, where ways of working are embedded well in every classroom. Staff continuously reflect upon, and improve, their own practice. As a result, pupils are making very strong progress in mathematics and have very positive attitudes to learning.

Leadership from the top

‘It’s particularly important for primary schools to take advantage of the opportunities in the area of teaching for mastery in maths.

The great thing for me is that Maths Hubs are all about collaboration led by outstanding practitioners, who can be based in schools of any quality and any community, and it’s about making sure that you spread that practice. That resonates with what we are trying to do as a multi-academy trust.

‘You only have to see the way that subject leaders of mathematics in primary schools come together in a Maths Hub group when they’re working on mastery. You can see that they’re motivated, and you can see that confidence and passion for great practice spreading.

‘Part of the attraction of engaging with a Maths Hub is that it’s funded. But such is the quality of the CPD that, if budgets weren’t as tight as they are now, you know schools would probably pay for it.

‘Another positive for me is that the mastery initiative has been given time to develop and put down roots and change culture. That is something that perhaps I didn’t envisage when it was first being spoken about. But now I’ve seen it.’

Julie Hiddleston, executive head of two GLF primary schools (William Morris and Longford Park in Banbury) trained as a Mastery Specialist through the Maths Hubs Programme in 2016/17. Her deputy, Louise Price, trained in the same role in 2017/18. Louise is now leading a Work Group of other local schools starting their journey to introduce mastery into their maths teaching. At all times, their work has been supported by the GLOW Maths Hub.

The pair oversaw the transformation of William Morris from an Ofsted rating of Special Measures in 2016 to a rating of Outstanding after an inspection in September 2018. In those years KS2 maths results rose from 9% of pupils reaching age-related expectations, to 81% of pupils reaching this benchmark. Inspectors commented positively on what they saw in maths lessons:

Teachers use consistent and precise methods of instruction in class. This helps pupils as they move through the school. For example, pupils recognise the standardised models used in mathematics to break up large numbers and can therefore progress without having to learn new methods every year. As a result, learning time is maximised and pupils can practise what they have learned. This has ensured that the vast majority of pupils attain at the expected standard, although more are capable of exceeding the expected standard than is currently the case.

Julie explains the role that Maths Hubs and mastery training have played in the school’s improvement, and in the MAT more generally.

‘As a result of the journey that Kate Mole and I have taken the school on, the MAT has gained a better understanding of mastery and can see the benefits and impacts. The support we have from the MAT now is quite strong. We frequently now talk to senior members of the MAT, so that when they go into schools, they can support a headteacher who’s trying to adopt the approach. It’s about having the understanding at the top (of a MAT) of what the pedagogy is, and the theory that sits behind it.

‘Generally, there’s a really good vibe and understanding in our MAT. The central team has given over quite a lot of time in headteacher forums and residentials to Kate, Louise, and me, and we have all delivered training to the maths group. Senior members of the MAT have got involved and grappled with mastery, and that explains the success we are having.

‘It’s easy to believe in something like mastery because the evidence and the theory just speaks for itself, but you have to have somebody who lives and breathes and teaches it and understands it really well to be able to communicate that to people who are new to it.’

Location: Spread across the south of Devon.

History: Launched in 2006 as one of the first primary federations in the country. The most recent schools to join the trust did so in December 2017 and September 2018.

In 2018/19, two teachers at trust schools are training to be Mastery Specialists, one with Jurassic Maths Hub and the other with Cornwall and West Devon Maths Hub. By 2019/20, the aim is that all schools in the trust will have participated in a Maths Hub Teaching for Mastery Work Group. Some schools took part in these groups in 2017/18, others joined in 2018/19. The remaining ones are applying to take part in 2019/20.

Leadership from the top

Rachael Caunter is Strategic Lead for maths across the trust and Executive Head of Teaching and Learning for the five southernmost schools. Formerly she was head of one of the trust schools.

‘We identified maths as an area of improvement across all of the schools within the trust. We realised that we needed a cultural shift in the way we teach maths, so that the children become more confident and secure mathematicians. So, we developed an action plan and one element of that was a staggered approach to engaging with Maths Hubs work.

‘We’re very aware that it’s going to be a journey and it isn’t going to be a quick fix but, to give one example, we are already getting promising feedback from the Year 1 teachers working with the spine PD materials. They are reporting that children are securing place value understanding and using mathematical language more confidently.

‘When this filters through the school we’re hoping to see children across the school in a different place from where they are at the moment, with fewer gaps in their understanding. The teachers training to be Mastery Specialists are coming back with a lot of knowledge, which they’re sharing across the trust. What the Maths Hubs offer is brilliant.’