Mindset: why is it so important in teaching for mastery?

Liam Colclough, a headteacher in Sheffield, is convinced that to introduce teaching for mastery effectively, a shift in mindset is required At St Thomas of Canterbury School in Sheffield, staff are in the second year of adopting a teaching for mastery approach to mathematics. “For this to be effective,” says Liam Colclough, Headteacher, “encouraging and developing ‘growth mindset’ in pupils is fundamental”.

When Liam talks about mindset, he is referring to the work of Stanford Professor of Psychology, Carol Dweck. Dweck is leading the field in establishing:

‘a growing body of evidence that students’ mindsets play a key role in their math and science achievement. Students who believe that intelligence or math and science ability is simply a fixed trait (a fixed mindset) are at a significant disadvantage compared to students who believe that their abilities can be developed (a growth mindset)’. (Dweck 2008 - Read the full paper here)

How is a growth mindset developed in pupils?

Liam takes a three-pronged approach to developing growth mindset in children. Teachers work directly with pupils to encourage positive ways of thinking about their ability to learn. But Liam also emphasises the importance of challenging any beliefs, held by teachers or parents, which are likely to limit children’s capacity to learn.

There are no ability groupings at St Thomas Canterbury, removing the ceilings of expectation that these can create. Children work in mixed attainment pairs and groups, and are encouraged to talk and discuss their understanding.

Strategies to encourage and develop a growth mindset in the children are seen explicitly in the classrooms. Modelling learning with a growth mindset is one effective way that the school does this: demonstrated particularly powerfully in Liam’s work with the trainee teacher working at the school. James Taylor is on a SCITT route into teaching and is being mentored by Liam. Liam is using a technique called ‘in-the-moment coaching’ whilst James is teaching. James asks the class, “What changes when a shape is translated?” and a sea of hands go up.

James picks a girl to answer. Liam steps in:

“Mr Taylor, can we have a time out here? Just rewind a moment… How could you ask that question so that everyone gets a chance to answer?”

before he then takes the answer from the girl. It is a brave model for teacher education and in stark contrast to the model that often expects the trainee to purport to be a qualified teacher for a class of pupils that are rarely convinced. It takes considerable skill and confidence from both mentor and trainee, but the modelling for the children is immensely powerful.

At one point Liam stops James and asks him to think about how he could have presented something in a better way. James pauses and is clearly at a bit of a loss as to what Liam is getting at. Liam addresses the class:

“Do you see what Mr Taylor is doing really well here? He is thinking. He is not sure of the answer, because teachers don’t always have the answer, but he can take some time to think. And this is making him a better teacher for you.”

This gives James the time he needs to change his approach, rewind and start again on a different tack.

Similarly, when James is demonstrating an approach to translation on the board, without any verbal explanation, Liam offers a commentary to the observing teachers:

“We are trying to reduce teacher talk, and mime is one way that we do this”.

Again there is a sense that this is only partly for the benefit of those of us observing: making such things explicit in front of the children is creating an awareness of the learning process. Liam sees these models as invaluable in creating a growth mindset and openness to learning in pupils.

It is not only the trainee teachers that experience public ‘in-the-moment coaching'. Pupils making mistakes are highlighted and their mistakes discussed. A pupil is encouraged to say, of his classmate: “Joe has got horizontal and vertical the wrong way round”.

Then the class are asked: “And what are mistakes?”

To which they all chorus: “Valuable”.

Liam also uses ‘in-the-moment coaching' with his more experienced staff in order to implement the teaching for mastery approach. It is a new way of developing teachers for him, and in time he intends that the whole leadership team will coach in this way, and then that teachers will use this coaching model to peer-mentor each other in lessons. It is a challenging model and some staff do find it hard, though Liam says that most have been impressed when they see the power of it. James is thoroughly convinced by the model:

“It’s really, really good. I find it really useful. It’s the same way you’d teach kids I guess. He’s picking something that could have been done better in the moment and making me do it again, and by doing that it makes it easier to establish better patterns of behaviour for me as a teacher. Children like seeing that – it’s useful for them because I’m modelling me accepting that I’ve made a mistake and can improve on what I’m doing from someone who’s in a position of authority. So it’s like I’m modelling being a good student at the same time. It’s fluid and you don’t forget things. The children get better teaching because it’s changed that moment."

When asked if it undermines his authority at all, James says:

“It doesn’t feel like that for me. I think because we make such a big thing about ‘mistakes are valuable’, we refer to it every day, and it’s part of our behaviour management – I don’t think they see it as me losing authority.”

Developing a classroom culture that values mistake-making can help develop growth mindset. A growth mindset has been shown to enable children to tackle genuinely difficult tasks because they are not afraid of making mistakes but can learn from them. Children with a ‘fixed mindset’, on the other hand, become disheartened by mistakes and will therefore opt for easier tasks that reaffirm their belief in themselves.

Liam explains that when he visited Shanghai in 2014, on the first teacher exchange as part of the Maths Hubs Programme, what he was most struck by was the high expectations from the teachers:

“Teachers just expect all children to get there, because they know they have to, because it’ll improve their life chances.”

Liam attributes this to a belief amongst Chinese teachers that all children can achieve highly in maths – a very different outlook from the one that has characterised much of the English education system where categorising children by perceived ability has been expected and become entrenched.

Convincing teachers that all children have the potential to achieve at maths became Liam’s first goal. “The most important thing is changing the perspective of the teachers, addressing beliefs that limit children’s capacity to learn.”

Communicating a vision of a mastery approach to the maths, as well as a clear strategic plan for implementation and plenty of opportunity to see what teaching for mastery looks like, has been effective in getting staff on board.

Teachers in Liam’s school are now seeing children who were previously identified as ‘low attaining’ thriving and achieving in the mastery climate. A particularly strong example of this is given by the Year 3 teacher:

“I’ve got a child that came up from Year 2 with 1A but because she’s had access to the curriculum and not had a ceiling put on her learning, she is accessing the Year 3 work. Her problem is with recording at the moment but she can explain orally and I know she has a complete understanding because she can communicate it."

Liam recognises the importance of parental mindset in the success of teaching for mastery. To this end, he has kept parents informed and on board every step of the way through the changes. When levels disappeared, the school held a big open evening, and now they hold six parent workshops annually in which parents are taken through developments in the maths curriculum. He has been clear with parents that children will not be accelerated on to content from the year ahead. Equally, he is clear that children should not be encouraged to think that some people ‘just can’t do maths’.

What the visiting teachers notice

When we visit, Liam is facilitating a professional development event, entitled ‘Mastery in the Classroom’, for local schools interested in adopting teaching for mastery. The day is organised so that the visiting teachers have an hour in which they can visit any of three KS2 classes, moving between them as they choose. In the hour after break, they have the opportunity to do the same in KS1. This is followed by time for discussion about what they have seen, and questions to Liam about both his experiences in his school, and ideas for implementation in their specific contexts. Liam has also arranged for them to talk to three of the school’s teachers. What the visiting teachers see is a school that has implemented teaching for mastery wholeheartedly and with the commitment of all the staff. 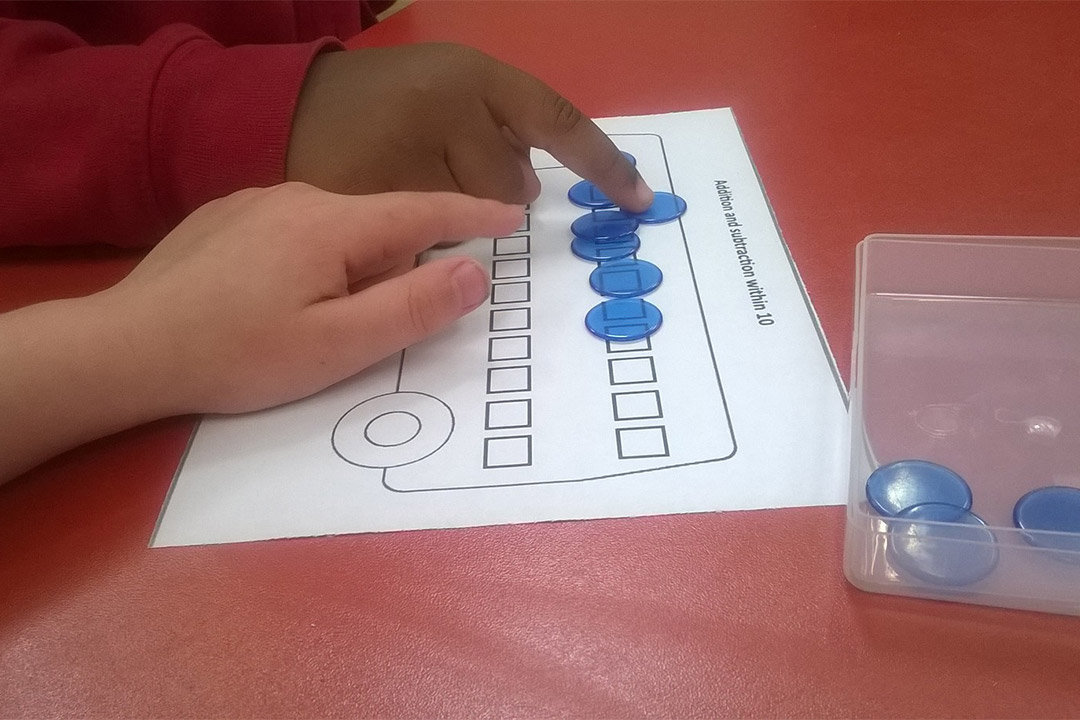 In the discussion after the lessons, visiting teachers have been struck by the rich use of mathematical language in lessons, and the high expectations and confidence of the children. However, one visiting teacher raises a concern that the Reception children are just learning to add numbers to ten which some will have been able to do on entry. And she is right, but teaching for mastery emphasises depth rather than acceleration for these children. This is evident in the Reception class where children are encouraged to use and understand the concept of ‘equations’ – formed orally within a story about children getting on and off a bus – and how they express the relationships between the numbers. Similarly, children in Year 1 are gently being introduced to the idea of proof, being asked to ‘prove’ the additive equations they are creating, using Diennes.

Liam suggests that it is important to move away from the belief that every child needs to be making rapid progress every moment of every lesson. Rapid graspers should have their understanding deepened rather than accelerated on to more difficult concepts. He believes that practice is also important for really embedding a concept. Learning to represent these additions in different ways and to talk confidently about them is a valuable way to achieve depth of understanding for children that may already be able to carry out the procedure. There is an emerging recognition amongst the visiting teachers that the practice of differentiating by giving different work to children arranged in groups of perceived ability has been limiting expectations and achievement. And that achievement is more effective and embedded in the long-term if the focus is on depth rather than acceleration.

At St Thomas of Canterbury, Liam has ensured that teaching for mastery is embedded at the very fundamental level of people’s beliefs. He recognises that it cannot just be tacked on to an existing curriculum:

“I think if you don’t address the mindset, it becomes just another fad – like the emperor’s new clothes.”

This case study was first published in 2016.